Written by
Dave
Posted in
Talk about banjos
Comments
7 Comments 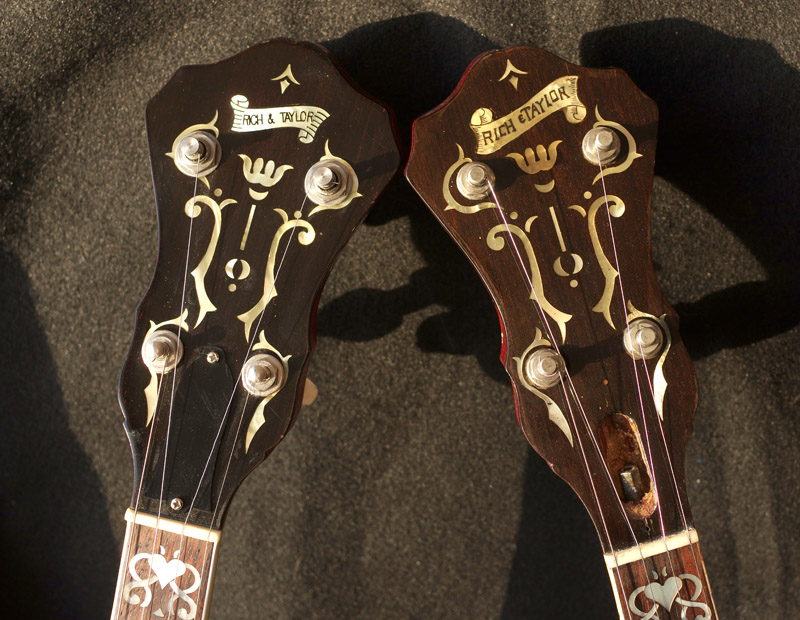 The story of two banjos
Today I finished a banjo rebuild that was years in the making. I posted some pictures of the necks a few weeks ago. One bare, one getting a Tung oil treatment. This banjo was in pretty rough shape with loose and worn frets and binding and pretty scratched up. Obviously it had been used a lot. Today I learned why. Because it’s the good ones that get played! I finally got to play it- and proves this out. It’s a very interesting Rich and Taylor JD Crowe model from 1992, and no serial number.
The story begins in 1992 when Greg Rich, (the very well reputed and well known banjo designer and builder) had recently pulled the Gibson banjo division back from slumping quality single-handedly. He was hired to help them make great banjos again. The “Rich era” Gibsons bring top dollar as they are known for being some of the best Gibson banjos since the epic prewar banjos. After accomplishing this feat, Gibson and he parted ways. The next venture for him was a partnership with the skilled guitar and banjo craftsman Mark Taylor. His father is usually mentioned when talking about Mark, but Mark grew up with a top notch luthier and resonator guitar builder- his dad, Tut Taylor. However in all fairness, Mark’s skills and abilities are known independently of his father’s legacy as he continued building quality Crafters of Tennessee banjos later on.
The new partnership would become known as “Rich and Taylor banjo company”. With The abilities both of these men had, they were sure to produce some outstanding banjos. Rich and Taylor banjos are, in every sense, Gibson copies, and if you think about it, with Greg RIch having redesigned the Gibson banjo line, These could in fact, be called “Greg Rich era Gibson copies”. The designer of the best GIbson banjos since the prewar days was now using his own name on a banjo. What could be better?
I have two Rich and Taylor banjos, and they both were made in the first two weeks of the Rich and Taylor company’s history. I learned this from Mark Taylor who told me about my first acquisition, the JD Crowe model prototype you see below on the left. This was the banjo that as far as Mark knows, was the first one that bore the new company’s name. He said he had made it at his home before they had their shop set up. It was actually a custom build that Greg RIch had promised years prior to the professional player Dennis Caplinger of California. He promised Dennis: “I’ll build you a real banjo” according to Dennis. Before presenting it to him, Greg and Mark took it with them to a show in Texas to demonstrate their work. After all it was their only finished banjo. This is where JD Crowe played it, liked it and ordered another just like it. What was a custom build for Dennis Caplinger, instantly became the JD Crowe signature model prototype banjo, after which all of the others were modeled. Dennis Caplinger also told me a lot about the banjo and its interesting history. (Note that this banjo does not bear the signature block inlay because it became a JD Crowe model after it was made). The only other Rich and Taylor prototype banjo that I know of in existence is rumored to belong to Ron Block (of Allison Krauss and Union Station). Now, about the second banjo I have, below on the right- One of the very first production JD Crowe models made. The story I got is that Greg Rich himself desired this banjo and pulled it out of the first batch set for delivery, and it became his personal banjo for years. It was made to be delivered to a store, but never made it. Apparently with the condition it was in when I acquired it he played it a lot! I have not confirmed the story of this banjo with Greg RIch yet, but I hope to. This story would also explain why it has no serial number on the label, if perhaps, he pulled it out of the batch before the numbers were assigned. Another clue about both of these banjos is their unique headstock badge. Mark Taylor told me that the badges these banjos carry are exceedingly rare. It sports the names Rich & Taylor in script, a kind of a scroll inlay. He said that after the first batch went out the Taylor Guitar company of California complained about their use of the name Taylor. Instead of putting up an argument, the badge was changed to simply, R & T. This is the compromise you see on all of their later banjos. He said that if a banjo sports the original headstock badge, it was made in only about the first two weeks they were in production. The Caplinger banjo was pre-production,
After a few short years the two men parted ways and the company was no more. Today their vintage banjos from the early 1990s are known to be equal in virtually every way to the Greg Rich era Gibson banjos. They share every notable feature; Designer, Greg Rich. Materials, Three ply rock maple rim, Kulesh spin cast and machined tone rings, high grade mahogany, nickel plated brass hoop, pot metal flange, and beautifully executed with skill and precision. The “Greg Rich era Rich and Taylor” I just finished- (I would have rather left in un-restored condition but it wasn’t playable). To repair it, it needed a lot of work and I just didn’t get to it for a couple of years. Now that I can actually play it, I’m amazed at the tone, and it’s one of the loudest mahogany banjos I’ve ever played. And now, it represents an interesting story of a short-lived company that for a brief time- made history building some of the best American banjos of the 20th century.

7 thoughts on “The story of two banjos”